Immediately after the Sahasra Namaarchana, Laddus, Vadas, Tamarind Rice, Pongal, Curd
Rice, etc are offered to the main deity and other images of the Lord in the sanctum
sanctorum every morning. The first food offering is called the initial bell. The second one in
the after noon is named the second bell. The third one at night time is called the third bell.
Lovely Pongal called “Tiru Veesam” bell is offered to the Lord just before Ekantha Seva
(Laying the Deity to sleep). Afterwards, it is offered to Sannidhi Bhashyakara. All these
foods are offered by the priests alone.

TYPES OF “NAIVEDYAM” OFFERED TO LORD 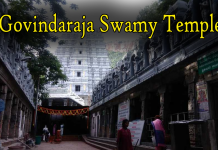